9 replies to this topic

I come from a small town--everyone knows everyone. When I was growing up, there was one nice family there, that started getting harassed. We didn't have the word "stalking" back then, but that is what it was. There were letters and phones calls of a threatening nature, suggesting that they knew all about the family and their 'secrets'. The stalker knew details about friends and family, and even went so far as to mention the color of the girls bathing suits, and other intimate details about the children. The police investigated the family's relatives and their friends, unsettling everyone's lives, and their whole circle, but to no avail. The stalking continued for several years, until the family was ready to leave town.

Finally the stalker was caught. It was the woman who lived next door. She would sit at her window, and twist the details of their live to fit her sordid schemes and fantasies.

Well, of course she was ill.

That is the same with these stalkers--the hoaxers. A few desperate people, who have been close enough to learn a few details, and then have twisted them to fit there sick and sordid little schemes. They have played the friend to many of us, wheedling their way onto our e-mail lists, and forum, with the sole purpose mining for information to use against Kim and his wonderful dogs.

Kim would mention, for instance, that his cousin Elvis had come to visit, and next thing you know, there would be an entry from "Kim's cousin Elvis", saying, "Kim never had dogs..." etc., etc., continuing with more trumped up libel. They weren't above digging up an old girlfriend with a grudge, or impersonating an expert.
But worse than that, Kim might mention that he was interviewed for an article, or a documentary, and these same individuals would phone, pressuring the editors to drop the piece, using all their vicious slander as evidence!

We had to face the fact, that a person or persons among us was associated with the hoaxers. However, in the course of investigating their identity, we also learned of their use of aliases to make it appear that there was a larger group--a technique typically used by internet trolls called "Sockpuppets". And that is exactly what these people are--trolls. They have no purpose, other than to disrupt. They hide behind a cause that is close to the heart of everyone, animal welfare, making false accusations and preying on our concerns, while they use libel and slander to interfere with the business of the IIDOBA, Song Dog Kennels, and specifically, Kim LaFlamme, our President and Founder.

To these pusillanimous individuals, these vituperative cowards, who are beneath our contempt, I say:
You portray yourselves as caring and concerned, when you are actually bitter, and scheming.
You claim to want the truth to be heard, but instead use gossip-mongering to spew hateful lies.
You would have us believe that you have uncovered a hoax, when it has been you, all along, that has been perpetrating a scam.

Now is the time to turn the tables, and we will take no more of your petty abuse.

Now, we call 'Hoax' on the hoaxers.

Thanks for taking the time and energy to write that. Thankfully, when we succumb to petty gossip we lose credibility! We all get a certain feeling when we know a person is putting their thumb on the scale, right? It says more about the person who is saying it than it does about the object of derision.
Meanwhile I enjoy a lazy sunday with my two marvelously furry four-on-the-floors!

That is the same with these stalkers--the hoaxers. A few desperate people, who have been close enough to learn a few details, and then have twisted them to fit there sick and sordid little schemes. They have played the friend to many of us, wheedling their way onto our e-mail lists, and forum, with the sole purpose mining for information to use against Kim and his wonderful dogs.

Thanks indeed Allison, it has always seemed sad to me that such a wonderful dog could be the source of such petty but vicious gossip. I visited the hoax site to see what it was about, and it was obvious by the tone and low level of personal attacks that these hoaxers don't even care about the truth. Having met Kim and heard his knowledge and seen the care he takes with his dogs, I cannot believe much of anything these hoaxers say. Too bad for them, there are so many happy owners to disagree with their slander. Unfortunately I'm sure potential owners are scared away by such garbage.

Unfortunately I'm sure potential owners are scared away by such garbage.

Yes, these people are interfering with the business of this organization. And I'm glad you brought that up, because Kim invites anyone and everyone, who is in the least concerned, to come and see the dogs, and how they live. All of us who have been there, know that it is the coolest kennel. I have never seen a nicer set-up. Those are happy dogs. I would love to have something like that teepee-tower, in my backyard! We'll have some pictures of it, up soon.

I have spent quite a bit of time with the dogs at Kim and Arlene's and it is a wonderful place to visit. The dogs have ample room to play and they do! They love to romp in the big kennel together. There is a large central playground where most of the "girls" hang out. They have tree trunks to climb and the top dog loves to sleep at the pinnacle of the TeePee. The boys kennel is on the side of this and contains usually two or three dashingly handsome guys. It always strikes me how the indian dogs do not fight with one another -- they do bicker -- but they live together very well in a community. Moms with pups have their own very separate kennels where the little ones will be safe. There are many igloos with the open air kennels and they are all warm and cozy and kept clean. It is a very nice place for animals. Whenever I am there Kim usually has two or three dogs roaming and helping him with his chores. I have never been attacked or even harshly approached by any of the dogs. They are all friendly -- of course some more than others -- but none are vicious and certainly none are ill or starving as you see in puppy mills -- as a matter of fact, Yapi, the dog who Kim took back because his owner died of cancer, was a bit on the chubby side. His coat is thick and lusciously brown. I have taken him to the vet and his is very healthy. I love to go out there and see the new pups and visit with some of my favorite of Kim's dogs. 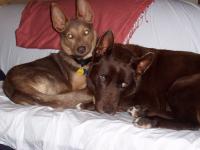 So that's the famous Yapi!

You are absolutely right, about the kennels. Any dog, would be happy to play there, and I love to visit.

I absolutely agree that Kim and Arlene's dogs, cats, horses, birds have plenty of what they need to be happy. Seems to me that animals are their life and they take great care of them!
Takes an animal lover to know and recognize another. I only hope Kim knows how we all believe in him and what he stands for!

I absolutely agree that Kim and Arlene's dogs, cats, horses, birds have plenty of what they need to be happy. Seems to me that animals are their life and they take great care of them!
Takes an animal lover to know and recognize another. I only hope Kim knows how we all believe in him and what he stands for!

Not to mention the dogs that Kim sells are healthy and happy too. I have lost count of the number of times people have commented on how happy and sweet my dog is. And the only unplanned trip to the vet so far was due to a cat scratch in the eye. There are no congential diseases, no eye or ear problems or bad joints. AI dogs do require a significant amount of training and discipline, though all dogs really do. But they do eventually give back, with their eternal happiness and willingness to please.

I'm coming to this discussion rather late in the game. I just recently joined the Forum (2019) and read this string. I felt compelled to contribute. I have been aware that Kim has had to deal with con artists and impostures. That must be hard. I think most human beings want to go out into society with the perspective that people at least try to be somewhat truthful. For Kim to run into characters that are self-dealing must be difficult.

What I want to say is that Kim's endeavor to save and preserve the American Indian dog is the highest dedication. The research. The work in reaching out to people and tracking down dogs and stories and history. That takes a HUGE dedication of the heart. It is from his heart that the American Indian dog goes on to live today and is not just a page in the history books. I have found that when ever someone casts a light from the heart there is a shadow that does follow. It is hard to accept that at times. These con artists see the beautiful work that Kim has done and now they want to profit of it for their own means. That is because these type of short sighted people do not have the heart or dedication to put their love into keep Indian dogs strong the way Kim does. It is all about the dollars for these people. I'm glad that Kim can see through them and hold the line. I also know that holding the line is not easy. Going through the indignation is something that no one wants to go through. It treads on the heart.

I recently saw a show called Bosch. It is an LA detective series. In the show there was a great quote and I think it applies here. The quote goes: "There are two kinds of truth. The first is born out of darkness that gets bent and manipulated to serve an individuals purpose. The second is what we hold inside and know is right." Kim is holding the truth inside that we know is right. The impostors posing as American Indian Dog breeders are the darkness that gets bent and manipulated for their own purpose. With that said. I'm incredibly grateful for Kim's strength in enduring those fake breeders.

Back to American Indian Dog: A True American Breed