4 replies to this topic

I can hardly believe it has been 8 years since our 3 year old Waki came to us. It was Valentines day 2012 when we got "the call". What a perfect day of the heart to start such an epic journey. Aside from a little gray on his muzzle and ears, Waki is forever 21. Just yesterday we went to the play area before breakfast and he decided he wanted breakfast NOW. No worries - just used the larder of nature for a snack. Gots to have good hearing and eye/snout coordination for that

Many wonderful things have flowered from adding Waki to our family. We've made some wonderful friends because Dog people are the BEST. We got Cake who is a constant source of amusement and we've watched two indian dogs raise a german shepherd. It's hilarious to have a shepherd that points and has strong eye. He's giant so the strong eye is wild. https://www.dailydog...llie-gives-eye/ There's a passage in this article about how it's impossible to teach the eye to a dog- apparently unless you are an Indian dog.

So thank you Kim for this wonderful, priceless gift. I cannot imagine my life with out these wonderful, silly, glorious dogs. Even dog vomit. It's an honor to be awakened at dark o clock by Cake getting on my feet to blourp because she turns to me when she needs help.

Well let me just second those words of great wisdom and joy and say without hesitation that these dogs, these AI dogs that we are all so obsessed about, really are something other than else, as a handful of humorous Englishman would say.

Our first experience with Waki’s sister Lili was unique in that we’d never braved the airport in search of a pup before.  And, one that can be as intimidating and/or frustrating as our particular small, neighborhood, almost grass-strip-like airport:

For those that are not familiar, ORD is Chicago’s O’hare International Airport and it is in a constant and titanic struggle with Atlanta’s Hartsfield International for the title of busiest airport in America! ORD has lost the title a few times and it strikes as if there’s a sense of inferiority building in civic circles.  Plus the thing seems rather off point.  Shouldn’t it be ‘most on time’ or ‘safest’ or ‘least manned with Neanderthals posing as TSA agents’ or something?  Busiest?  Really?  Even Waffle House gets busy.  …easy now, put the syrup down.

Anyway, after our notification from Kim we waited and waited for the call about which flight she’d be coming in on.  I was freakin’ a little bit because in a past life I had experience interacting with the cargo side of operations at ORD so I know how things are done and this worried me about a little pup. 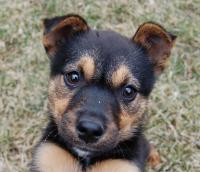 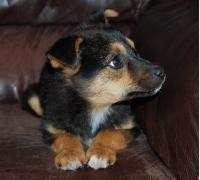 The coolest thing, besides The Squint® herself, was getting to know some of her siblings peoples.  That’s been the most amazing thing of all.  This community is amazing…always has been it seems and I hope always will be.

Here’s the best part.  Come to find out later after Kona came to the dance that Kona and Cake share a papa!  That’s just too freaky.

Here’s to keeping siblings together and in the process, extending the family.

(in this image, taken at her brother's house, she is trying not to be seen.  Hint: near the bottom of the image, look for ears)

Love your digression on ORD. Brought back memories of our experience picking up Kaposia (almost 5 years ago!) We live close enough to said (grass strip, ha ha!) airport, that for family, extended family and friends we are "the airport people" with a driveway big enough to save said travelers a few pesos rather than parking at the airport. And yes, love says it all with these amazing, amazing dogs! They literally radiate the most wonderful energy. Our conversations often include, "Thanks to Kim for saving these dogs! What a privelege to be awed every day by sharing life with this creature!"

It's not just valentines day....it's everyday that I am so thankful for these amazing canines and Kim. It is truly an amazing gift that Kim has given to us. Thank you, thank you.