Anyone Else Have A "lap Dog?"


35 replies to this topic

Kaposia knows when we've eaten our last bites of breakfast, then she wiggles her way up into our laps as a (hard to ignore) reminder that it's time for our walk!


"A life ain't much of a life without a dog in it, s'what I always said."
Dan Gemeinhart, The Honest Truth

I think we have "semi" lap dogs - neither one seems to like to have his back feet off the floor/ground, but Bandit likes to lay his top half across both of us when we sit on the cough to watch tv, and believe me, he puts his full weight into it.

“The better I get to know men, the more I find myself loving dogs.”   ― Charles de Gaulle

“Heaven goes by favor. If it went by merit, you would stay out and your dog would go in.”   ― Mark Twain

Tayamni is a lap dog all 54 lbs worth, and Coffey is a snuggle bunny

sorry about the duplicates, I'm having a posting sql error .....

Here is my lap dog

she never wants to move when she is on my lap.  I even said "supper" "eat"  "food" - no response.  (I really did have to get up and feed the cats and dogs 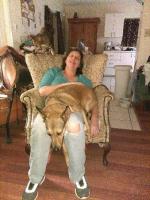 or maybe she just wanted the chair???? 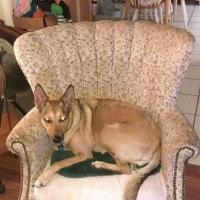 (this is after supper

It wouldn't let me edit above:  Tayamni had early lap dog inclinations

I basically lose all feeling in my legs every morning while drinking coffee because Kiva HAS to snuggle down into my lap. Only at the Kitchen table. Otherwise he wants to sit next to me. Pretty darn cute.

haha Zeph is all lap dog, he always has to cuddle something living - If I'm not available he will cuddle my Husband or any guest that is over. He tries to snuggle with all the dogs at Doggie Daycare and with all my staff. Love how snuggly he is

Snuggly is SO right on....Wyot has to keep getting half on my husband's lap during coffee time, and he gets his hugs and rubs and if I come downstairs, he won't even move, because he wants this snuggle time! After breakfast (sometimes he tries during breakfast, but he knows better, and this is when he goes and hangs behind my hubby's chair, one paw up on the heater....LOL!!! They really do love their cuddles! In the car, he tries to get in front, on my lap while hubby is driving, but I discourage that (saw a fatal accident right in front of my house in December, a few weeks after we got him, and it involved a dog, who unfortunately had to be put down due to a broken spine..

). He settles, but I have to have his favorite toy back in the seat with him. They are lovies!

Both mine like to be on my lap when we are in the car. They take turns.

Tolinka climbs into my lap when he is giving me the ball back as I sit on the ground.  An independent boy until HE decides to show affection, then he is ALL over you.....Two Step and Rain nestle up when ever they can...which is all the time.

Snuggly is SO right on....Wyot has to keep getting half on my husband's lap during coffee time, and he gets his hugs and rubs and if I come downstairs, he won't even move, because he wants this snuggle time! After breakfast (sometimes he tries during breakfast, but he knows better, and this is when he goes and hangs behind my hubby's chair, one paw up on the heater....LOL!!! They really do love their cuddles! In the car, he tries to get in front, on my lap while hubby is driving, but I discourage that (saw a fatal accident right in front of my house in December, a few weeks after we got him, and it involved a dog, who unfortunately had to be put down due to a broken spine..

). He settles, but I have to have his favorite toy back in the seat with him. They are lovies!


Y'all are killing me Zuni IS Not a snuggler,sometimes he gets up and moves to another chair if I sit down, he sleeps by my feet sometimes and likes to be where he can see me but he wouldn't crawl in my lap unless there was a steak there ... I wonder if its a gender thing or just the luck of the draw... I love him but I miss having a cuddly dog .

Kooskie's a cuddler, but my other AIdogs were not.  It took me a while to get used to her!

However, my two previous dogs showed their love in other ways that did so melt my heart.  When I was sick, they would stay next to me.  When I moved or walked here or there, they were with me.  They kept with me without a cuddle, leaned on me, watched me, listened without question.

It's a virtual cuddle.

Ayita is so NOT a cuddler, but like Allison's non-Kooskie dogs, she shows her love in those same other ways. She seems happiest to be near us on her own terms, leaning and/or laying her head on a knee or other body part. The way she looks into my eyes with that "I love you, mom" look is pretty awesome too. From time to time, she will get up close and personal, but not for long. Sometimes when she's hanging out, I can't help myself and go over and give her a big snuggle hug. She is very patient with me, but happier to admire me from afar.

"When Man waked up he said, 'What is Wild Dog doing here?' and the Woman said, 'His name is not Wild Dog any more, but the First Friend, because he will be our friend for always and always and always.' "  Rudyard Kipling (The Jungle Book)

Nakoma is not much of a snuggler, MOST times, either.  He doesn't even greet me at the door when I come home (I had to "google" that one up to see what the deal was, haha.... turns out it's nothing to worry about).  He'll only greet me if he hears me talk to my daughter first.  But most times, he's waiting on the bed, on his back, wagging his tail, waiting for a belly rub... The rascal!

And when we sleep, I swear he tries to push me off the bed.  But he usually sleeps next to me, sometimes with one paw touching me.  And he is always following me around the house and loves to be petted and played with, of course... just not hugging or sleeping ON me.  He is a leaner though, for sure.

Nakoma also isn't too fond of giving me (or anyone) his paw.  He'll do it just to be obedient, but he'll quickly pull his paw(s) away.  And... he doesn't like to be pet on his head if I'm in front of him and need to reach over him to do so.  However, if I'm next to him or behind him, then I can pet his head.  He's very peculiar.  But still extremely affectionate and loving in his own ways. 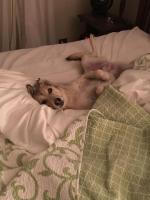 Kekona has misunderstood the meaning of lap dog almost from the beginning.  She'll cuddle with the best of 'em but she prefers to access the bed (preferably unmade) while still warm and then she'll proceed to 'dig in' to find the best position from which she can appear to be a world class contortionist.

When it's bed time she'll jump up and dig in, on top of the covers this time, and snuggle, moan, growl, gurgle, burp, fart and generally relax and have a grand ol' time.  She doesn't really need us there actually.

Then there's The Squint®. 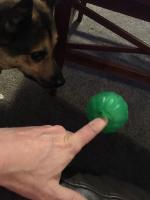 She prefers cuddling with spherical objects or objects that squeak, beep or otherwise emit noises leading to their domination, subjugation and, eventually, complete destruction 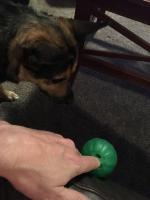 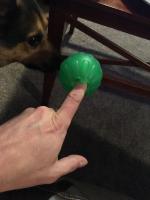 Hahahahah!  The digging in the bed drives me friggin insane!!!  Nakoma does that when he gets a new favorite toy!  He brings it on the bed and then digs and all the sheets are in a circle on the floor!!!!! There are times when I need to make my bed about ten times a day!!!  The rascal!

Thanks for all these great insights..I have since noticed Zuni leaning on me, sitting on my foot and he does snuggle with my hubby (sigh)...I guess I'll have to take what i can get .

Back to General Discussion