8 replies to this topic

Every night neighborhoods from Mt Shasta to Santa Cruz go outside at precisely 8:00P.M. and howl until precisely 8:05 to give thanks to our first responders during this pandemic. It is really awesome, and the process of howling releases that pent up frustration. Very healing. I thought this was such a great idea I texted all of my friends here in the Valley and told them about it. I mentioned that if they felt self conscious, just go out and listen. If you hear anything, respond if you feel like it. It's really hard to resist.

When I first started howling in Ben Lomond, I was, as far as I could hear, the "lone wolf".....well my 3 pups were with me and they couldn't resist in joining me with a good howl. The four of us howled and I could hear no response. The second night I took my Buffalo Drum, & 3 pups, and we danced and howled together precisely at 8:00 P.M......... In the far distance, across the river and waaaaaaay up stream, I heard distant howling...We couldn't resist. so of course we responded, and they back to us. The third night we repeated the journey and heard a few closer people howlng......and way far away there was another drummer...we responded to each other. (so fun) By the fifth night, )it takes a bit of time) I could hear about 6 different neighborhoods join the chorus. Not are only giving thanks to our first responders, but saying "hi" to your neighbors......another time to realize that we're in this together.....PLUS we get a "sing along" with our pups. Do this enough times and don't be surprised if they eventually tell you its time to get ready to go out and sing thanks.

Would be lovely, but here in the 'burbs I'd end up with a back yard full of concerned neighbors, and for sure someone somewhere would call 911, and then there'd be sirens howling.....

If your neighbor hood hasn't started this, text your friends, call your neighbors, let the kids in your area know (they love this sort of thing) invite them to join in the howl. You might be surprised who participates. OR go ahead and be the "lone wolf." As Dr. Seuss once said, "Why blend in when you were born to stand out." Your pups will love the song fest.

This is so awesome.....just heard from a few friends in Seattle Washington, Ashland Oregon, Tiburon California and the Santa Cruz California Community........Their neighborhoods are all sending out a BIG HOOOOOOOOOWl.
I just know it's way more wide spread than these neighborhoods. :-)

O.K. miz molly! With some prompting from my cell phone, Kaposia gave Thanks in a big way this evening.....so far no community mayhem 🐺😊

Waaaaahooooooo.  You go girl.  Keep it going.  It takes a little bit of time to get the neighbors involved, but once they do, they probably won't stop.  For 2 weeks I have been doing this every night at 8:00pm.  At first I was the lone human wolf.  Now we have 5 drummers and a chorus of canines and humans singing the song of thankfulness within my "hearing" neighborhood.  AND my voices horse.

I know this is just a small part of the San Lorenzo Valley that I can hear.  I wish I could record the whole Valley in unison at 8:00pm.  That would be so awesome.

Let me know how your neighborhood grows.

I just recieved some fun involvement on the HOWL. A friend of mine that lives in Boulder Creek, up river from me, said that the wild peacocks in her neighborhood start their neighborhood off with their calls just before 8:00, then the neighbors howl at 8:00, at 8:05 they stop and then the owls hoot, and the evening is finished off with the peacocks again. Apparently this happens on a nightly basis. Another friend told me that the coyotes join in the howl in their neighborhood. Nothing like waking up our wild cousins. Awesome.

The "howl" finally made the news on our local news station in Santa Cruz and also on PBS news. So awesome. Hope you all are joining in the song of thankfulness.

Here we are, 5 months into the pandemic, and my neighborhood is still giving thanks with drumming and beautiful howls. 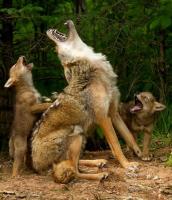 When one tugs at a single thing in nature, he finds it attached to the rest of the world. ~John Muir
Back to Owner Check In