Anyone Else Have A "lap Dog?"


35 replies to this topic

NorCal, don't feel like you are losing out.  One of my non-snugglers, used to be goofy only with my husband, but with me, he would do the most touching things. If I made a big deal he would withdraw, but if I just quietly accepted, he would persist.

For instance, this dog and I drove across the state quite a bit, several times each year.  I would rest my hand on the gear shift as we drove.  After a number of times making the 5 hour trip together, he began to rest his paw on top of mine, on the gear shift.  It was so quietly touching, that it chokes me up to think of it, even now, years after his death.

You will have your moments and you will not be disappointed. Just wait.

I would also suggest, that as the Alpha female, he is showing respect to you and to your husband, choosing not to be too familiar and to not cross some boundary that we don't quite see.

You can initiate some subtle love signals that do not make him uncomfortable:  the touch on the shoulder, the quick sounds that are unique to your language.  Think of guys that are good friends, but don't get mushy.  There is your "in".

Great insight, Alison. This thread started with Kaposia climbing into our laps after breakfast to strongly remind us that it was walk time...a bit bossy on her part, perhaps crossing that boundary of the alpha instead of respecting it. We love that Kaposia is a "cuddle bug" with us, but depending on the situation....is it respect, or are they pushing the envelope on boundaries? It was just so entertaining the first few times she did it....all 40 pounds of her squishing her way into our laps. Doesn't happen any more, she knows the routine now.

Just a few more thoughts; to me so far the hallmark of the AI dog affection is the fact that they ALWAYS want to be with you. They become very, very attached to the family. Kaposia lays on our feet all the time too, but as much as it's a desire for closeness, she does it so we won't be able to go anywhere without her knowing about it. She's always aware where everyone is at all times. This deep attachment is probably one of the reasons Kim interviews prospective owners so carefully. It would be very hard on these dogs to be given up once they belong to your "pack." Kaposia is very good about being left home alone...very good, but think she always wonders why she can't go along sometimes. The funny and intelligent qualities never cease to amaze. Usually if Kaposia wants my attention, she'll put a paw on my arm....unless I've got the iPad...then the paw goes directly on the screen. She's figured out that that will put an immediate stop to what I'm doing. When we travel, she's always in a harness, but she still opens the power windows in the van on her own whenever it pleases her....knows exactly where the button is and pushes it quite precisely. Gotta' love 'em! Gotta' stay one step ahead though, because every so often they will try those limits and boundaries.

When we travel, she's always in a harness, but she still opens the power windows in the van on her own whenever it pleases her....knows exactly where the button is and pushes it quite precisely.

Someone brought the nasty soccer ball in (with Scott) and slept with it in his tent last night. Must be genetic. Waki has his treasures he stores in the tent. Cake sneaks in there during the day but leaves the treasures intact. She has a little pile on the bed (by our feet) so no digging lest it disturb & dislodge the treasure trove. These are the only two places in the house where a clean fresh toy stays relatively unmolested vs total destruction in neutral territory. Waki was a cuddle bug / bed bug until Cake. He gave that all up for her. Since then his style is more subtile. He'll come ask and still enjoys a good fuss made over him but it's not like it was. It's been interesting to experience.

Tayamni is the lap dog but not on the bed.  She used to keep a paw on me but prefers move to her own temperpedic.  Maybe I toss too much in my sleep???  When she was smaller she stayed on the bed all night with a paw on me.  I miss that.

When I get home I settle in and then I need to give her attention.  I have found that sets the mood for the night.  If I miss giving her attention and perform too many other tasks first while she is waiting patiently then the window passes and she does not always sit on the couch with me.  I think she takes it as a queue I want space????

If I have trouble sleeping and am moving around during the night she will give up her sleep (heck she can catch up during the day - and does bed contortions like Kekona) anyway she follows me from bedroom to living room and back and forth as many times as it takes until I get to sleep.  She takes care of me in her own way!

Coffey on the other hand is still a snuggler just like Kim said.  In the living  room he will lay on your feet or snuggle up next to you on the couch but never on you like Tayamni the lap dog.

YET, he LOVES to snuggle in on beds.  It's like waking up an wondering when this new appendage grew on you.  He will also sometimes sleep on the bed with his head on the pillow when no one else is on the bed or if it is an odd time he doesn't want to snuggle and push you into the wall - that's how much the snuggle is!!!!  He will lie down on his side with his front legs tucked to him and his back legs stretched down and put his head on the pillow like he sees people sleeping.   Imitiation is the sincerest for of flattery?  LOL!

They are both different in their ways of showing affection and I love it all!

She used to keep a paw on me but prefers move to her own temperpedic.

Tell us more.  There is a temperpedic dog bed?

Yes - they call them memory foam and orthopedic (if not Temperpedic branded). She has a head rest and everything! I'll take a picture of it ....

I guess since I have a Temperpedic mattress topper she decided she likes that too.

Mini-MEEEEE!  Yes, please give us a photo.

I always look longingly at the dog beds, but I think I want them more than Wyot does, LOL!!! Anytime I get him anything (yes, even a temperpedic, for we get samples from manufacturers, seeing as my hubby is a chiropractor), he may look innocent at first, and enjoy it, but then, there goes the stuffing!!!!!!! Bits and pieces of foam, leaving a trail......he got a hold of a nerf football yesterday, which I keep around for our kids and grandkids, and he ripped apart one half of it, pieces ALL over the floor- he chose the neon green side!!!!!!!!!!!!!!!!!!!!   <sigh>

But, he is comfy enough on the floor, it seems. I caught him in a picture finally, sleeping at the bottom of the stairs, one paw up on the first step. He loves my rug in the sun room, and chooses to nap there, but besides his crate (which has a towel in it that he loves to sleep on), his all time favorite is in the sunshine, by the kitchen sliders.

<swallowing a lump in my throat>  I hear you...it's.a bittersweet feeling for sure. Nugget lives on, and Kaposia is making sure you know it!

Xochitl is definitely not a snuggler - so the rare moments that she does, I am in heaven. But she does that thing where you sit next to her and she moves away to get more comfortable on the couch. But she snuggles with me much more than hubby and it drives him a little crazy, even though you can tell that she loves him so. Just different relationships?

There was one time I cried with how frustrated I was and she climbed on my and wrapped her neck around mine and gently "arooooo"ed into my ear. I nearly lost it then.

“And I urge you to please notice when you are happy, and exclaim or murmur or think at some point, 'If this isn't nice, I don't know what is.”
― Kurt Vonnegut, A Man Without a Country

She doesn't always like being photographed .... maybe she thinks it is evidence.  Then sometimes she is posing pretty.  I don't get it.  Ahhh, it makes her mysterious!

She lays on her bed both ways, sometimes with her head on the headrest and sometimes curled opposite.

Notice in the pics her little monkey toy - she's had one like this since I got her (@ 9 wks old).  Coffey destroyed the original so we replaced it. 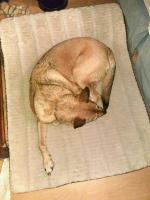 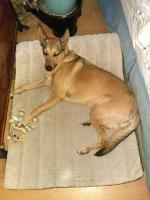 Back to General Discussion