7 replies to this topic

I explained to her that Darmok is an American Indian Dog and that there really aren't a lot like him around and none that I know of in our area.

She told me that a dog walker walks one named Emily.  She said that Emily is about 7 or 8 years old, weighs about 30-35 pounds, looks a lot like Darmok (she had asked the dog walker if Emily was part coyote) and has one blue eye and one brown eye. She continued to tell me that Emily was a rescue (from a shelter I think but don't remember) and that Emily was now on her 3rd owner.  She believes that Emily was abandoned/rehomed because of how much energy she has.  The presumably 2nd owner had her for several years but just recently rehomed her, to her 3rd owner, because the 2nd owners moved to New York.

The woman also said that the dog "sings" when it wants something and is one of the fastest dogs in the dog park.  She said that Emily's current dog walker has been with her for a long time and inlcuding during the transisiton between the 2nd and 3rd owners.

I gave the woman my card and asked her to have the dog walker contact me becuase I would be very interested in having a playdate with this Emily (and of course to get a photo of this dog).

My question, to those of you that have been on the boards for 7 - 8 years.  Do you know of this Emily or of any "missing" female AI dogs with one blue eye and one brown?

I am still hoping that I'll run into this dog walker and get a photo of Emily but from what this woman told me I have little doubt that she's an AI.  BUT I question how she came to be with this now 3rd owner and who the original one was that put her in a Shelter (or was she stolen?).  There's no way for me to know at the moment if the dog's original name was Emily or not.

I thought this was an interesting and odd encounter so thought I'd share.  Other than laying in wait at the dog park for this mystery dog walker to appear with Emily, any ideas?

This is certainly interesting...hope you find out...and let us know the outcome!

Wow. That sounds like an ai dog to me. Hope all goes well and you can set up play dates.

All of the Wolf and Coyote hybrids I've encountered have been 60 lbs plus and usually 100 + on the wolf hybrids. When it's been a lot wolf they have been 75 lbs +

Good luck searching!  I'd like to know what you find out.  Keep us posted on your hunt .....

Gib posted this in 2013 - I'm waiting to hear back from him about which dog park but I'm thinking it has to be the same dog at the same dog park this mystery woman was tellling me about.

Then,  a few days ago, Joan and I were running errands.  We located an off-leash dog park we’ve not been to before.  It was a block away from one of our scheduled stops.  Perfect.

We got Draco & Wicca out of the car, on-leash and heading to where we can see the dog pack running around in a field up a small slope.  We gradually, then suddenly realize that it’s one of those gate-less off leash areas.  We walked up to the two ladies (one a professional dog walker) and the 12 dog pack.  Confirmed with them it was, in fact, a gate-less dog park.

We swallowed, having never ventured the possibility of our dogs running right out a gate and onto busy streets, and unhooked them.  Counting on them to run either with the pack or to us.  And they did.  For the most part.  And we all had a grand time.  It worked out great and our dogs behaved beautifully.

But, that’s all sub-text and background.  The reason I mention this dog park is that there was a 3-year old NAID dog named Emily there!! 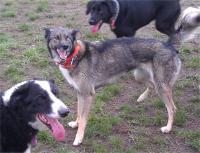 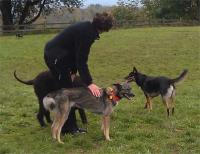 The dog walker said Emily is a rescue wolf hybrid called a Native American Indian Dog.  We had a very interesting discussion!

I told them how we researched and discovered the difference between AID’s and NAID’s.  We told them of visiting the dogs and how it was obvious once you met the dogs where the true and historic bloodlines were.

I told them to check out the website.  See the storied history of AID’s: the passion for the dog and it’s ancestry; the breeding closely encompassed and protected.

I told them that in the past some AID’s were used, in violation of an agreement, in a wolf-hybrid scheme.

They were glad for the info and both loved Draco & Wicca and said they’d check out the website.

The dog herself was a sweetheart.  A little too skinny, but she’s been bouncing around homes and is just newly re-rescued.

This was around when I was very active on the forums. I always loved reading about Draco, and then Wicca when she came into the picture.


Me too. Hope all is well in his family.

When one tugs at a single thing in nature, he finds it attached to the rest of the world. ~John Muir
Back to The Dog Park